While the intensities of the peaks in an X-ray energy spectrum are not directly proportional to element concentration, it is true that the concentration of the element in the sample will influence the height of the X-ray peak. Elements present in major amounts (> 10 wt%) will have major peaks in the spectrum while elements present in minor (1-10 wt%) or trace amounts (<1 wt%) will have small or undetectable peaks in the spectrum. 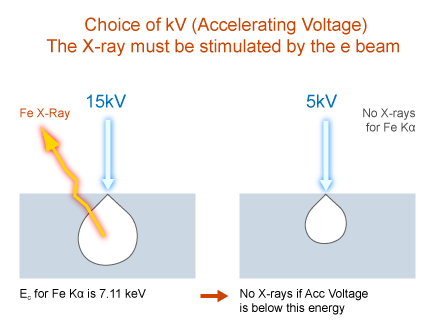 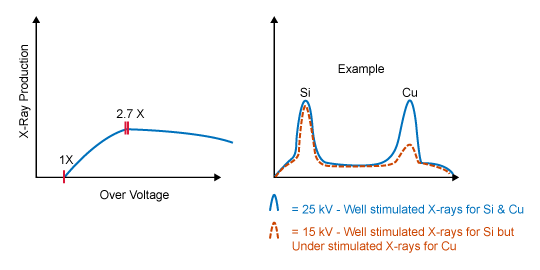 Figure: An overvoltage ratio of at least 2 is needed for efficient generation of X-rays. If low accelerating voltages are used, higher energy X-rays will not be efficiently generated.

Remember that the production of Characteristic X-rays is a two-stage process: ionization followed by relaxation with the production of an X-ray photon. However, this is not the whole story, and there is a competing process, the generation of Auger electrons, that can also lead to stabilization of the ionized atom. In this case, when an electron from an outer shell fills the vacancy in the ionized inner shell, the x-ray produced is internally absorbed by the atom and an electron is ejected from an outer shell. The ejected electron is known as an Auger electron and it has an energy equal to the difference between the ionization energies of the two shells involved in the initial transition minus the ionization energy of the shell from which the Auger electron is ejected. So the energy of the Auger electron is also related to the electronic configuration of the atom from which it came and is characteristic of the element concerned. 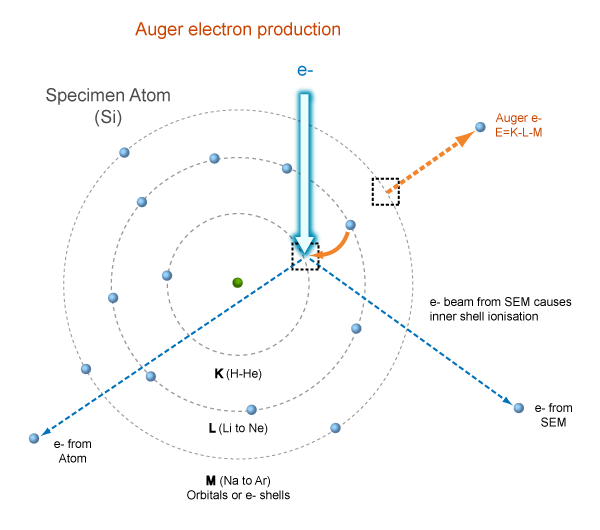 Figure: After inner shell ionization, the atom may relax by emitting a Characteristic X-ray or an Auger electron. The energy of the Auger electron is related to the electronic configuration of the atom that was ionized by the primary electron beam.

Not all of the X-rays that are generated in the sample by the primary electron beam are emitted from the sample. This is particularly true in the SEM where X-rays are generated within the interaction volume at a depth of many microns. X-rays may be absorbed by other elements in the sample due to the photo-electric effect (see Photo-electric animation). If the energy of an X-ray photon is equal to the critical ionization energy of an electron in another element in the sample then there is a high probability that the X-ray will be absorbed and a photo-electron produced.

While the absorption of X-rays depends on the other elements present in the sample, it is also true that low-energy X-rays are more likely to be absorbed than those with higher energies, and elements with higher atomic numbers tend to be strong absorbers of lower energy X-rays.