How much of each element is present in the sample?

In quantitative EDS microanalysis in SEM, the mass fractions or weight percents of the elements present in the sample are calculated. The spectra are processed to remove Bremsstrahlung X-rays and spectral artifacts, and then the Characteristic X-rays are compared with data measured from standard reference materials. In so called Standardless Quantitative analysis, or semi-quantitative analysis, the spectra are compared with data collected from standards in the factory of the manufacturer of the EDS system and stored with the system software. In fully Standardized Quantitative analysis the spectra from the standards are collected on the same instrument as the spectra from the sample being analysed, which allows for more accurate analyses.

Qualitative analysis to identify the elements present in the sample is a good prelude to quantitative analysis as it will allow the best operating parameters for the microscope to be selected.

If the sample is stable under high-vacuum in an electron microscope and is not susceptible to damage by the electron beam, then an accelerating voltage of 15-30 kV is recommended for quantitative analysis. This is sufficient to efficiently generate at least one family of X-ray lines for all elements.

If the sample is likely to be damaged by a high-energy primary electron beam, then it may be necessary to use a lower accelerating voltage. In this case, the higher energy X-ray lines may not be efficiently generated and low-energy X-rays will need to be used for element quantification, e.g., the L or M lines for elements with Z > 20. An alternative approach to reducing sample damage is to lower the electron dose by using a broader (defocused) beam.

The electron beam current (probe current or spot size) will control the X-ray count rate or intensity of the generated X-rays. The beam current should be adjusted to minimize damage to the sample but generate sufficient X-rays to allow reliable quantification (see Precision and Accuracy and Detection Limits). At the same time, the beam current needs to be adjusted to minimize spectral artifacts and achieve system dead times of ~20-50%. The beam current needs to be established at the beginning of an analysis session and monitored throughout the session as any drift will affect the number of X-rays generated from the sample which in turn will affect the quantification. Tungsten emitters or hot (Schottky) field emitters are required for quantitative microanalysis. Cold field emitters lack the required beam stability.

The electron beam – sample – detector geometry should be optimized. Set the stage so the sample is at the microscope's manufacturer's recommended working distance. The insertion of the detector is machine-specific; some are fixed and some are movable. In general, the X-ray detector should be as close as possible to the sample to maximize collection of the generated X-rays, but this may be limited by the presence of other detectors and safe operation of the microscope. There must be a clear path between the sample and the X-ray detector.

For standardized quantitative analysis the samples must be flat and polished. Samples should also be homogeneous, ‘bulk’ not porous or thin films on a substrate, otherwise the matrix correction procedures will not work correctly 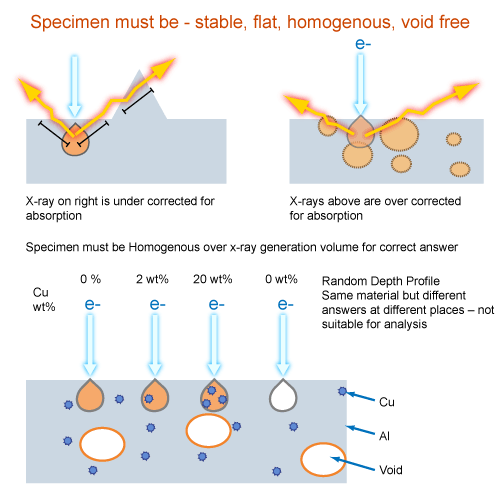 Figure: Proper sample preparation is critical for quantitative analysis. If the samples are not (A): polished and void free and (B): homogeneous on the scale of the interaction volume, special analytical techniques must be used.

Ideally, if a conductive coating is required for the sample, the standards should be coated with the same material. Carbon is the recommended coating material as it doesn’t interfere with Characteristic X-ray peaks from elements in the sample.

Some of the limitations of quantitative EDS analysis are listed below:

Beryllium (Z = 4) to Ne (Z = 10) X-rays can be detected by EDS, but there are two problems. Firstly, they are low energy X rays subject to strong absorption by the specimen. Secondly, the electrons involved in generating the Characteristic X-rays are also the valence electrons involved in the chemical bonding of the element, therefore the shapes and positions of the peaks may change in different compounds. The samples and the standards must be closely matched for best results. 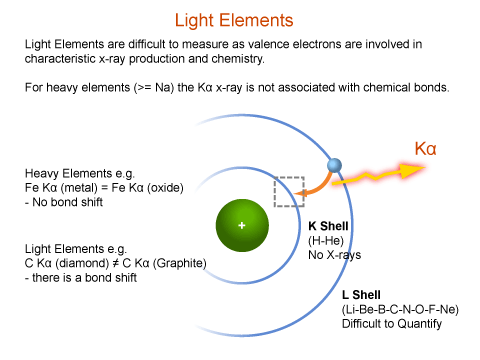 Different combinations of electron microscope and ED X-ray detector will involve different protocols for quantitative microanalysis, but there are six basic steps required for Standardized Quantitative analysis that should be common to all systems:

Most commercial EDS X-ray analysis systems will be installed with default spectra for all elements and the most commonly used X-ray analysis lines. This data allows an estimation of composition to be made for spectra collected on different instruments, and this information can be helpful in identifying different phases in a sample, for example. However, differences between the instrument and conditions for collection of the default spectra and those being used to undertake analysis elsewhere will limit the accuracy and precision of the results, so that they cannot be published as quantitative analyses.

Different materials have different mean atomic numbers, and because the number of Bremsstrahlung X-rays varies with mean atomic number (Kramer’s Law) the background counts, i.e., the contribution of Bremsstrahlung to the total counts in the X-ray peak, need to be subtracted before the counts in the Characteristic peaks can be calculated. Background subtraction in EDS analysis is most commonly achieved by using a mathematical filter known as a Top-Hat Filter as the first step. The filter is applied to each channel in the spectrum, and a value for the corresponding channel in the filtered spectrum is calculated. The value for any channel in the filtered spectrum can be approximated by finding the average value of the central channel and the three channels on either side of it (2M + 1), and subtracting from that value the average of the four channels on the low-energy side of the ‘hat’ (N), and the average of the four channels on the high-energy sides of the ‘hat’ (N), where M = 3 and N = 4. The result is to remove the slope and noise from the background continuum, and to subtract the background continuum from the Characteristic X ray peaks. 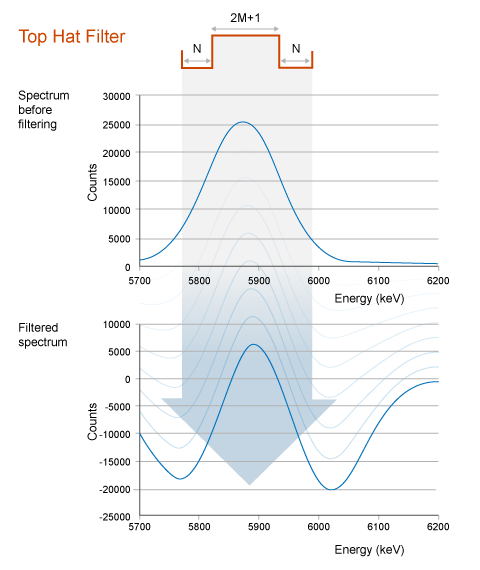 Figure: The application of a top-hat filter to part of an ED spectrum. Optimum values for M and N in the filter are 3 and 4 channels respectively, so the total filter is 15 channels wide.

If we apply this relationship to calculate the concentrations of the elements in a sample, we find that some of the calculated concentrations are too low, some are too high and some are about right. It turns out that every element in the sample has an effect on the measured X-ray intensity of every peak in the X-ray spectrum. That is, the measured intensity depends on the composition of the whole sample. Therefore, to calculate the concentrations of the elements in the sample we must apply matrix corrections to the raw intensities to allow for differences in composition between the sample and the standard.

There are three parts to the matrix corrections based on:

The matrix corrections are therefore commonly known as ZAF corrections.

There are two parts to the atomic number correction: a backscattering component and a stopping power component.

X-rays generated within the sample travel in all directions through it, and may be absorbed within it. X-rays are either absorbed within the sample or they pass through it – they do not gradually lose energy as electrons do. In the energy range for X-rays generated in the SEM, X-ray absorption is most commonly due to the photo-electric effect. This means that if the energy of the Characteristic X-ray is equal to the ionization energy of an electron shell of an atom in the sample, there is a strong probability that the X-ray photon will be absorbed and a photo-electron will be generated (see Photo-electric animation). Clearly, the probability of the X-ray being absorbed is dependent on the other elements in the sample and their ionization energies. 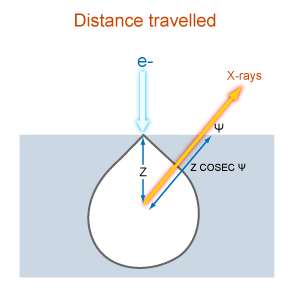 Figure: The distance travelled through the sample by an X-ray photon generated at depth z is z cosec Ψ, where Ψ is the takeoff angle of the X-ray detector.

Mass absorption coefficients are stored as a matrix of numbers of absorption of a particular X-ray line (the emitter) by an absorber: For example, a portion of the MAC matrix for Kα X-rays for Z = 23 to 29 is shown below.

The X-rays produced in the sample by the electrons of the primary beam have the potential to produce a second generation of X-rays. This process is known as secondary fluorescence, or just fluorescence. Fluorescence occurs when Characteristic X-rays produced by the primary-beam electrons from one element in the sample have an energy greater than the critical ionization energy of an electron shell in another element present in the sample. For example, Fe Kα X-rays (E = 6.40 keV) are able to fluoresce Cr Kα X-rays (Ec = 5.99 keV), but Cr Kα X-rays (E = 5.41 keV) cannot fluoresce Fe Kα X-rays (Ec = 7.11 keV). In this case, in an Fe-Cr alloy, the measured intensity of the Cr Kα X-ray will be too high although there will be little effect on the measured intensity of the Fe Kα X-ray.

The calculation of the concentration of an element in a sample must therefore take account of the differences in composition between the sample and the standard. A ZAF factor can be calculated that takes account of the stopping power, backscattering coefficient, absorption and fluorescence effects.