X-ray mapping provides images of elemental distributions in a sample. The information that X-ray maps provide can be readily assimilated and, in many cases, a problem can be solved by knowing the distribution of a particular element without requiring quantitative point analysis. While BSE images can show variations in composition in a sample, X-ray maps can show which elements are responsible for the variation.

Elemental X-ray maps are produced by recording the number of X-ray photons of a specified energy generated from each point over a fixed counting time, while the electron beam is rastered over a rectangular area.

Figure: Generation of X-ray element distribution maps by rastering the beam over the area to be mapped.

An image is generated by converting the number of X-ray photons of specified energy detected at each point into a brightness value for a pixel on the screen or digital image. The raw data for the image is a matrix of integers corresponding to the number of X-rays counted at each point and these are mapped to a single-band image with 0-255 levels. The image can be displayed as a grayscale image or assigned false colours based on a look-up table. 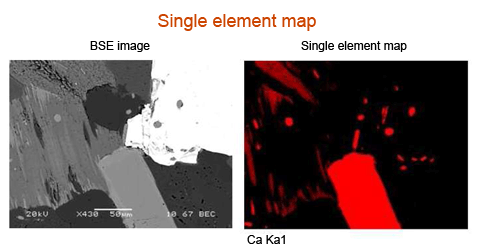 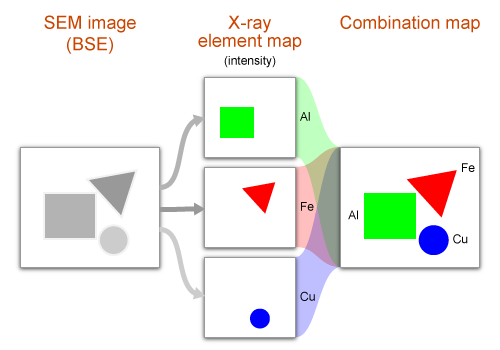 Figure: Distribution map for three different elements, in this case Al, Fe and Cu, can be combined in a three-band image to highlight different phases mapped in the area of interest.

Phases containing a combination of more than one of the elements being mapped will be displayed with composite colours. 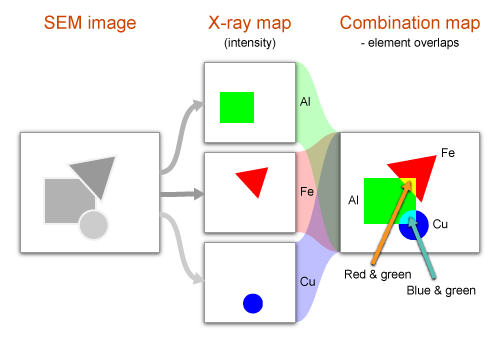 Figure: Distribution map for three different elements, in this case Al, Fe and Cu, can be combined in a three-band image. Composite colours are produced where different combinations of the elements are present in different phases in the sample. 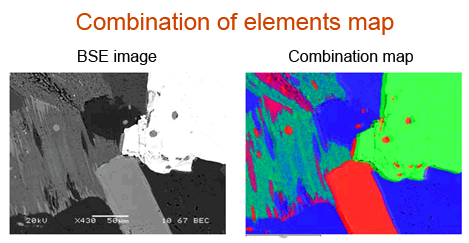 Figure: A combination map for phases in a sample of granite.

In older X-ray mapping systems, regions of interest, corresponding to the energy ranges of the Characteristic X-ray peaks of the elements to be mapped, need to be specified before collecting maps. 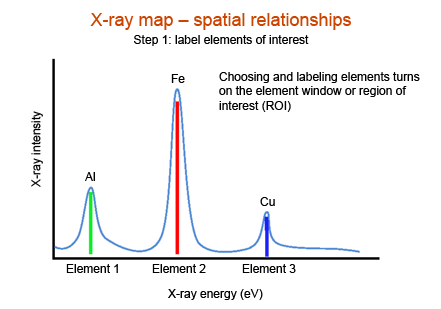 Figure: Labelling the element to be mapped, or defining regions of interest that include the Characteristic X-ray peaks of the element, may be required to generate an X-ray map.

In more recent packages, a complete ED spectrum is collected at every pixel in the image. This allows a map to be generated for all elements in the area mapped. More detailed mining of the data cube is possible after the data have been collected.

The dwell time for each pixel can range from a millisecond to a second or more. These times are much less than those used for point analysis (30-60 s), so mapping is ideal for major elements but is not going to reveal minor or trace element distributions as not enough X-rays will be collected.

The total acquisition time for the map will depend on the resolution of the collected maps (the number of pixels) and the dwell time per pixel. The acquisition time may range from ~0.5 h to >12 h (an overnight run). A very stable beam is required for long acquisition times, although means of adjusting for drift of the beam are available in newer software packages.

The sample to be mapped should be flat and polished to avoid shadowing of parts of the sample.

Some X-ray maps show the number of X-ray photons of a specified energy generated from each point over a fixed counting time (raw X-ray counts) and do not apply any corrections for background or overlapping peaks. The background counts are proportional to mean atomic number (Kramers’ Law) so phases in the map with higher Z will give higher background counts which will show up in the element maps, even if there is none of the element present in the high-Z phase.

More recent software packages apply corrections for background, but if this is not available, collect a map from an area of the spectrum where there will be no Characterisitc X-ray peaks, e.g. Ar Kα. This will be a ‘backgound’ map and can be subtracted from the element maps to minimize background artifacts. 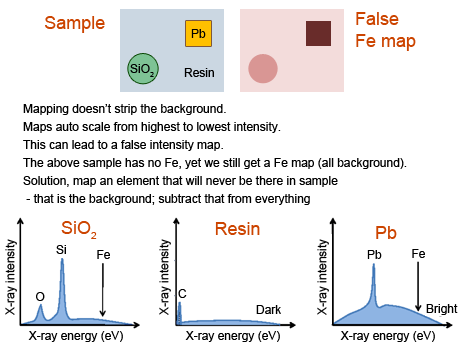 Figure: Artifacts can result if the element maps are not corrected for variations in atomic number between different phases.

If there are elements with overlapping peaks in the mapped area, e.g. Pb and S or Ba and Ti, the maps for these elements will be a combination of the counts for both elements and will appear the same. In the example below, the uncorrected maps for Pb and S give the same information, but the corrected maps show the true distribution of Pb and S in the mapped area, i.e. there is no Pb in the Zn-bearing phase but there is S. 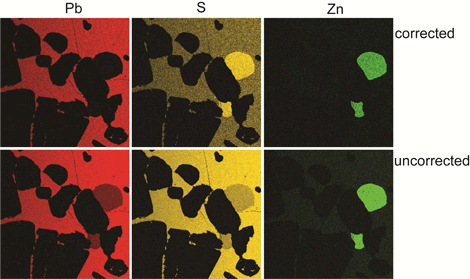 Figure: Artifacts can result if the element maps are not corrected for overlapping Characteristic X-ray peaks.

Again, more recent software packages are able to deconvolute the spectra to produce maps showing the true distributions of both elements.